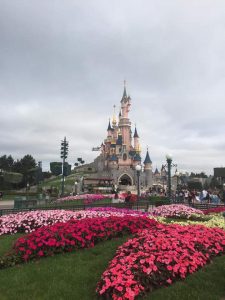 We have just got back from the most wonderful two weeks in France. We finished the holiday off with two days at Disneyland Paris.

We stayed at a caravan site a short drive away which we came back to at night ready to do it all again the following day. I have heard of people going for one day but I have no idea how you fit it all in. It was hard enough getting it all in over two days.

Disneyland Park is what is traditionally associated with Disneyland – this is where you will find Mickey Mouse, Sleeping Beauty’s castle and flying Dumbo elephants. Walt Disney Studios Park also has many rides but has a focus on how films are made – there are many sessions and studio tours to illustrate this.

There are 5 lands – Adventureland, Frontierland, Discoveryland, Fantasyland and Main Street USA at the Park.

The main street is made up of lots of shops, guaranteed to extract as much money as possible from you. We saved going into the shops till the last night and the children could choose two toys. They do have a parade each afternoon down main street but if you want to have a chance of seeing anything arrive early and position yourself near the front of the roads.

We spent a lot of time on the first day in Fantasyland. Peter pans flight ride was a big hit. Without a doubt Matilda’s (16 months) favourite ride was in this area “its a small world”. The lights, music and puppets totally memorised her and seeing her loving it is a moment I will not forget. 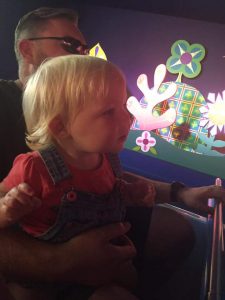 Frontierland was a bit of a disappointment for us (not the children) as big thunder mountain was shut and that was such a huge part of this area. In adventureland the boat and sands were also shut so we didn’t spend much time in these areas.

Discoveryland was good and the children loved the rocket ride in the middle of the park and the buzz lightyear ride. Dylan was slightly to short for the big ride space mountain but the dad’s tested it out several times!

The fireworks at the end of the day don’t start untill 11pm but even if you only make it the once you must. I thought Matilda would struggle but she actually seemed to enjoy all the noise and lights even more than her big brother. It feels like a late night with little ones but you must see it at least once.

We spent the first day based at the park and saved the studios for day two. 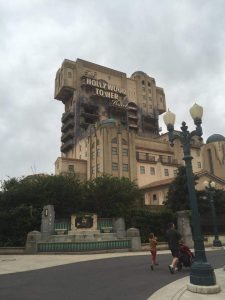 I thought the studio park was quite spectacular. We got into the park early so had the added bonus of jumping on rides with very short queues and getting to have a good look around without the crowds. The hollywood tower is a huge building, you enter a haunted hotel,  with an elevator that drops at incredible speeds and just as you think it will stop it drops again.  I wouldn’t recommend for younger children even though the 4 year old in our group could get on, she was so scared I don’t think we will ever get her on a ride again.

The most popular ride of the weekend was just around the corner from the tower. The toy story soldiers parachute ride. The children loved it so much think they queued 3 times for around 30 minutes every time to get on. A simple ride that lifted you up and down but held you high up each time.

The longest queue award goes to the ratoutille ride, around 60 minutes. It was good and all enjoyed it and it lasted for around 5 minutes but as good as it was 60 minutes is a long old wait. 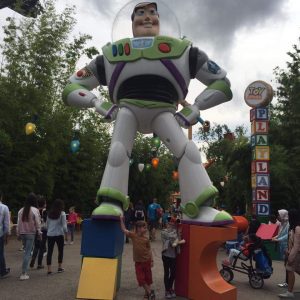 The two days at Disney have been totally and utterly up there. Two of the best days.

It is after all what we do and all that we can do for our children. Making memories, be it playing in dirt, dancing in the rain or meeting a certain mouse. Keep them safe and make memories. 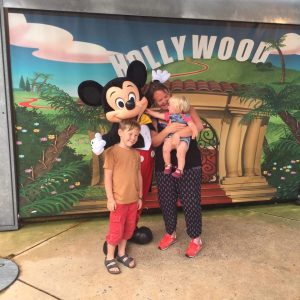