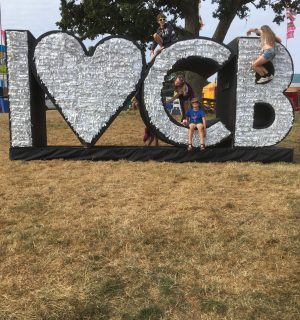 We found out we were going to Camp bestival only 2 weeks before it started. Eeek, I thought I must write lists, I must plan this is huge!Due to the short notice my husband was unable to come due to his work schedule so I asked my friend Christina to come along with me and the kids.

We left at 6.30am on the Thursday morning and it took 6 hours to get to Lulworth. Getting on site was pretty painless and once parked up we loaded up the trollies. I suggested we set up camp near where the boutique campsite is because I knew we would miss out the hills of death that way.
It took about 15 minutes to walk from the car to where we set up and it was a great location, I knew it was a short walk to the main areas of the festival site and we had two great food stalls, a coffee stand, toilets and showers very near us, it couldn’t have been more perfect.

We set up then went for a wander round, the site was pretty much the same layout as before with a few changes, I was disappointed to see the farmers market had been moved to the campsite and only went here on the last day when we were all wondering whether the festival was going to be cancelled or not. 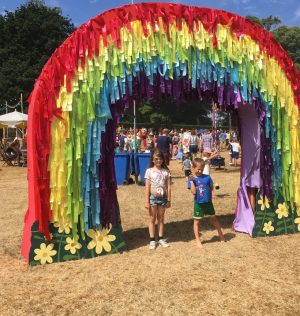 The first day of the festival, after eating breakfast at the tent we went for a look around as now everything was completely open, one thing I love about Camp Bestival is the fact that you don’t have to necessarily be planted in front of a main stage in order to be having a good time, there was stuff going on everywhere. We loved the entertainment at HMS camp bestival, Caravansari was like a festival within a festival, both kids danced their socks off while Christina and I watched the world go by. 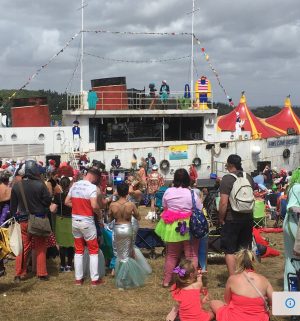 The site is HUGE. There really is something for everyone here, you could spend the festival in the Dingely Dell and still have a great time (we heard Mr Tumbles set from here while playing in the play area) it’s nice to have areas like this to retreat to as main areas can be very full on. 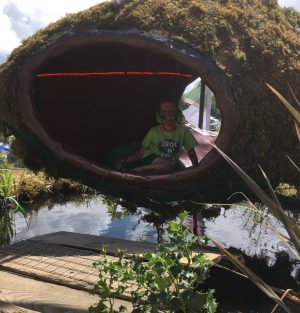 My biggest grumble is the cost of everything, I know these events are expensive to run but it seems like you can pay out for everything, the tickets are expensive enough as it is yet you can always add on things like using posh loos all weekend (that actually weren’t all that posh) paying for camping plus (which turned out to be terrible according to some facebook users as there weren’t enough toilets, camping pitches were poor etc which if you’ve paid out an additional £150 is really poor) paying for posh water (which supported charity but water is water surely) the way festivalling has grown in popularity over the last 5 years or so has meant that you could spend as much on attending as you would on an all inclusive holiday to somewhere hot and sunny (although I know what I would choose every time)
Now I had saved for the holidays anyway and I knew that this would be expensive so I was able to budget accordingly, but having to pay for rides and activities ON TOP of the entry leaves me a bit cold. So I set the kids a daily budget of £10 they could have one ride a day, plus a lolly or smoothie, this worked really well for us and the kids seemed happy with this. 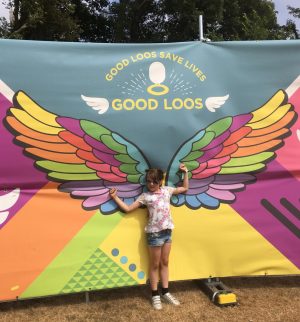 Camp Bestival has the best atmosphere, everyone I met was really friendly and as the majority of us are parents we had this kind of camaradie, I lent my sons ear defenders to a couple trying to get their baby to sleep and then the next day borrowed someones ear defenders as we had left them back at the tent as my son was not feeling DJ Vibes in Bollywood.

Music wise we didn’t see a huge amount, but what I did see I enjoyed such as Sara Cox doing her 80s thing, Rick Astely, DJ Vibes, cuban brothers, and a snip of clean bandit. Timings were a bit off so I missed a few things I wanted to see but its really hard when one of your children has mild aspergers and finds the whole thing a bit much and the other child just wants to get stuck in. 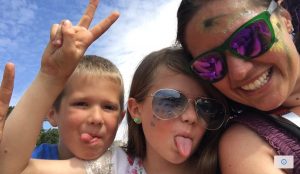 Would I go again? Yes I absolutely would, the camping spot was awesome, walking times were manageable, choice of food and drink was absolutely bang on the money and top notch, as mentioned before the atmosphere is fab.