Nozstock 2018 – A reminder of what made me fall in love with festivals 25 years ago. 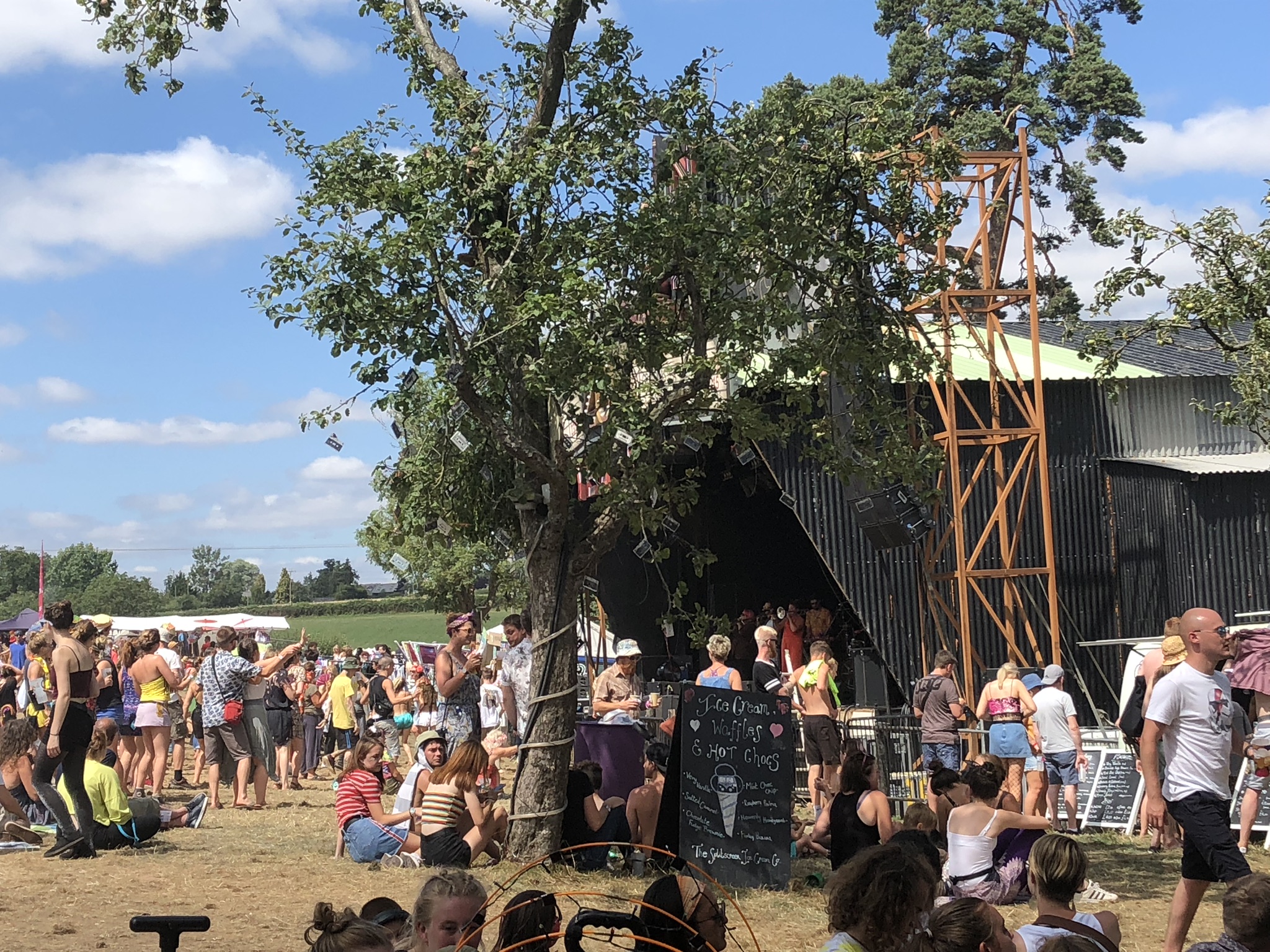 A 30 minutes drive is all it is for us to get to Nozstock, so close we can almost hear it. We are lucky to live in Herefordshire and it does not surprise me that a festival in the Shires has grown from a family party 20 years ago to a large successful festival.

I last came with Dylan to Nozstock in 2014. Working at other festivals and holidays having kept us away. The general lay out is pretty much the same but what has changed is the area behind the main stage. Previously it had a few craft things going on but not much else. That has changed very much for the better and had a extra stage called the sunken yard. We loved this space, the stage itself although small was at the bottom of the hill and the children loved sitting on the hill playing and watching everything going on.

That’s the thing with Nozstock you are treated to a constant stream of performance art. Some of the best and most creative I’ve seen at a festival (and we’ve seen a lot!). The sunken stage was also home to the famous paint fight. Every day if you are brave enough go and get covered in paint. Dylan was first in and last out. 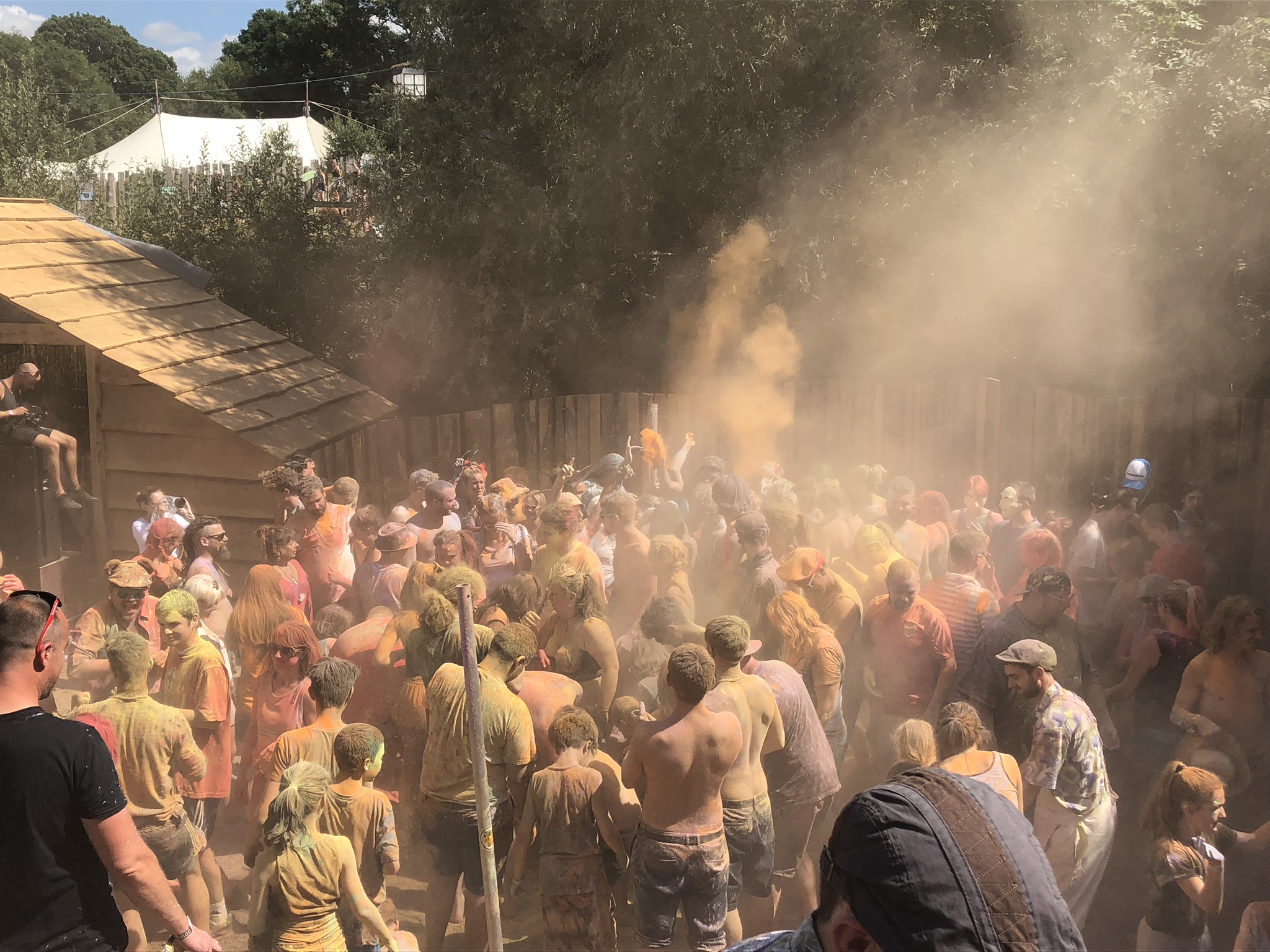 Just at the bottom of the field below you can find a tent called The Altered state. A tent full of theatre, circus and craft work. I have to mention face theatre that performed in the space on Saturday morning. A bizarre but completely captivating, interactive theatre. The children were totally engrossed and it was lovely to see Dylan so involved. 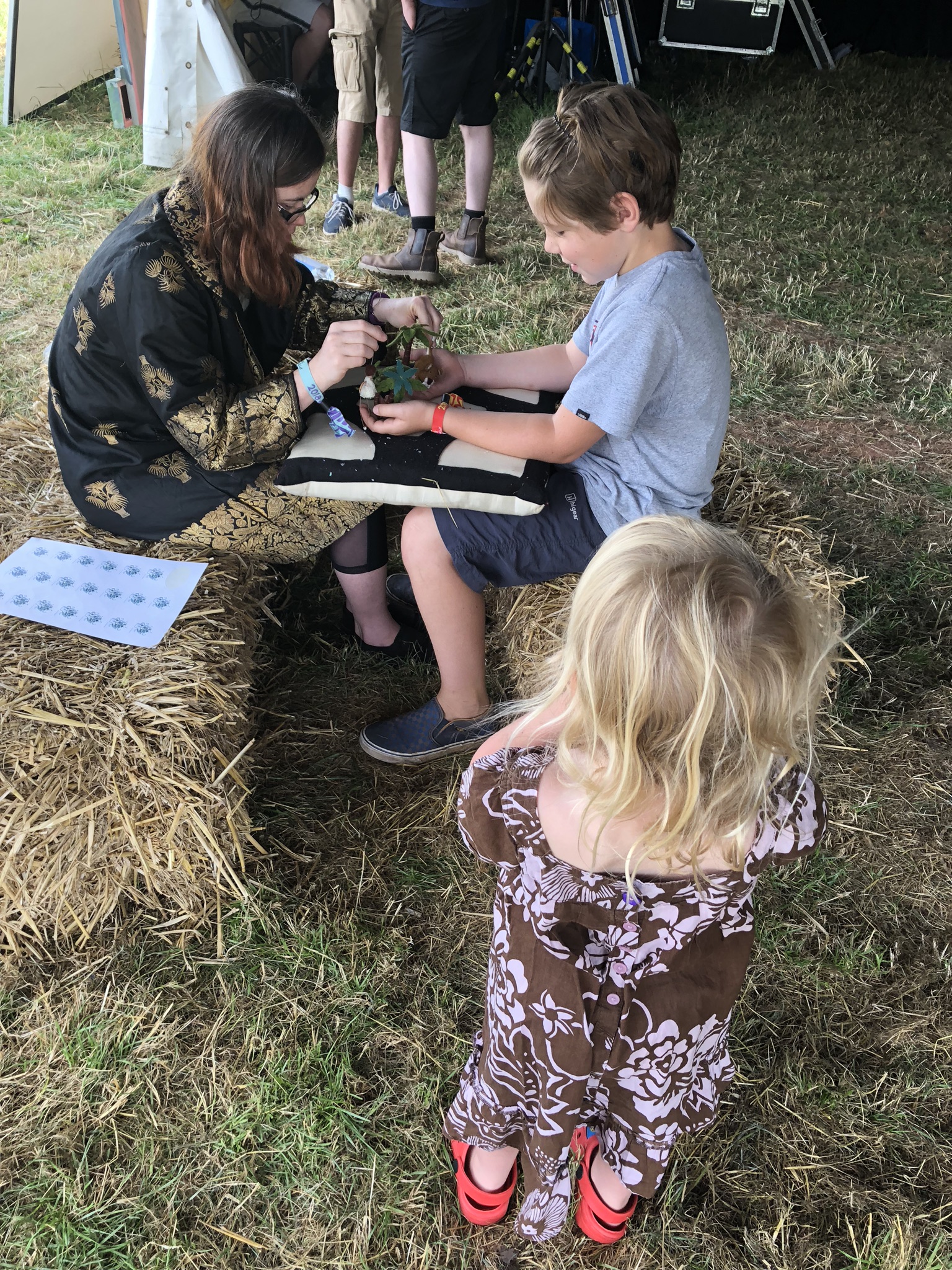 The other area that had changed since are last visit was the children area. Now actually a area rather than a spread out space of activities.

Open all day, every day although smaller than we are used to from other festivals it felt very safe and welcoming. I love the fact they had free glitter and tattoos, generally it’s something we always have to pay for and all the crafts were free and interesting for children of all ages. 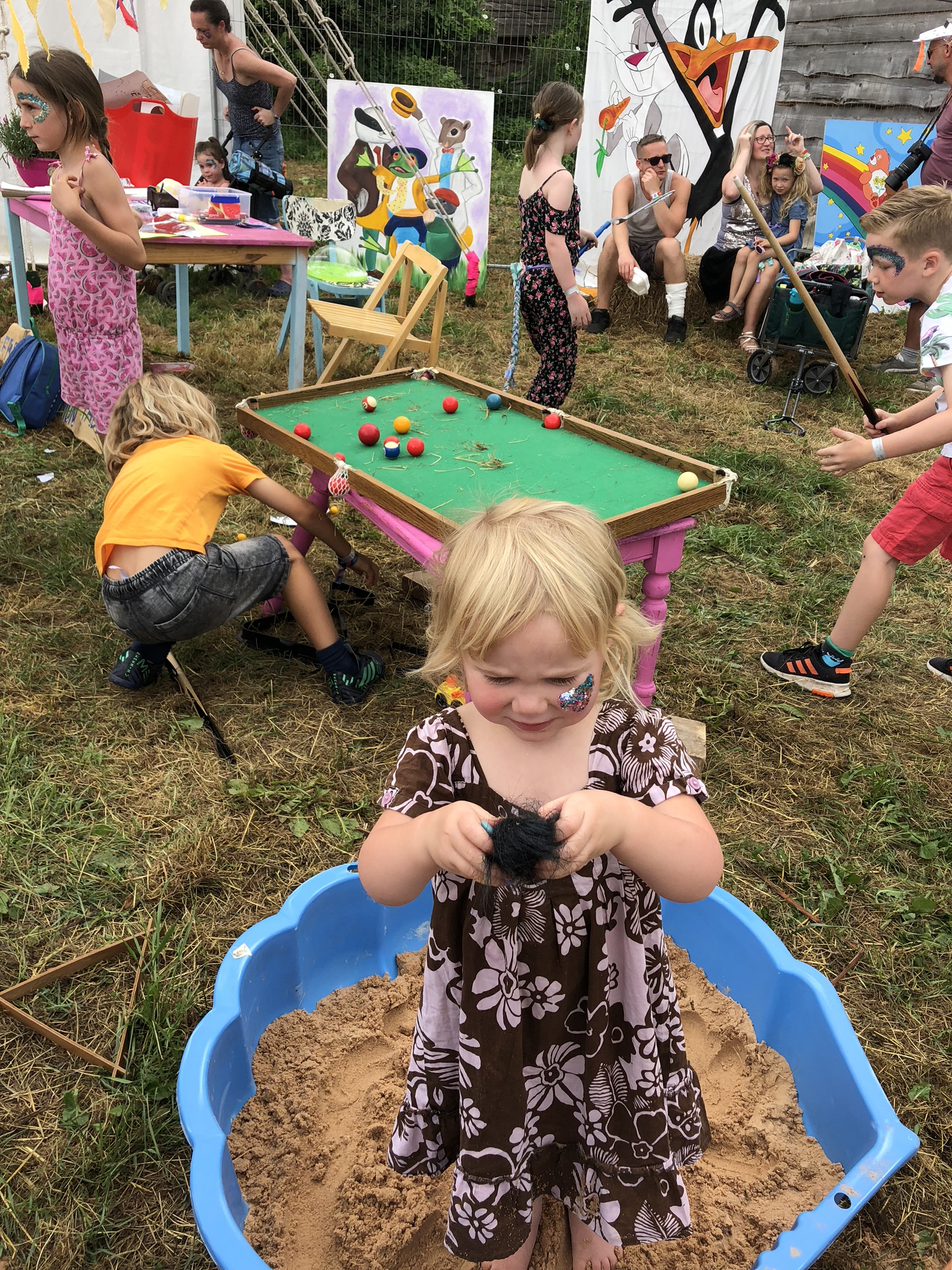 Whilst in the children’s space I had the pleasure of catching up Ella Nosworthy, we had spoken before the festival so it was lovely to catch up on site. We spoke about the children’s area, she is incredibly keen to put in and do all they can with the space.

I was interested to know her thoughts on my feelings of the festival being a festival of two halves. At night a very different festival to the one you experience in the day but I actually love it for this. I like the fact at night it goes a bit bonkers and I would like to think that my children are the type of children to not be bothered by all the madness. Ella summed it up for me when I asked her about it she said “it’s a certain type of family that come here” well we are definitely that type of family. 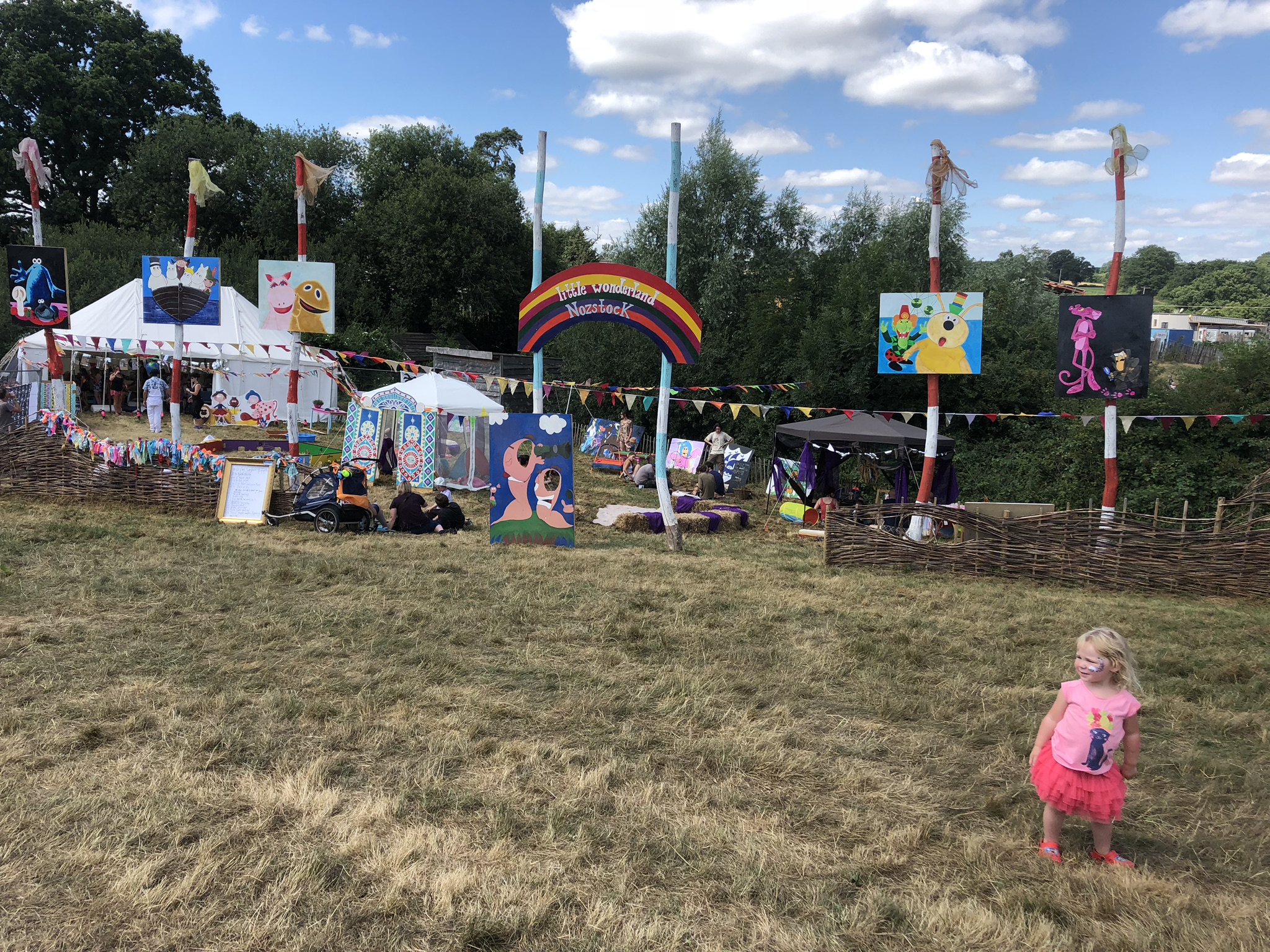 Although we didn’t stay over at night this time we spoke to plenty of families that did. They couldn’t speak highly enough about the area. With wooden play equipment, food and coffee vans and plenty of space for the children to play they said the children all played together and it was a glorious space that was far enough away for the children to settle at night but a easy walk to get to.

The main stage is surrounded with old sofas, plenty of benches and shaded areas under the trees. With ample food and drink stalls dotted around. We happily spent most of the Sunday watching bands and on occasion popping back to the kids area with Matilda for more creating and making. 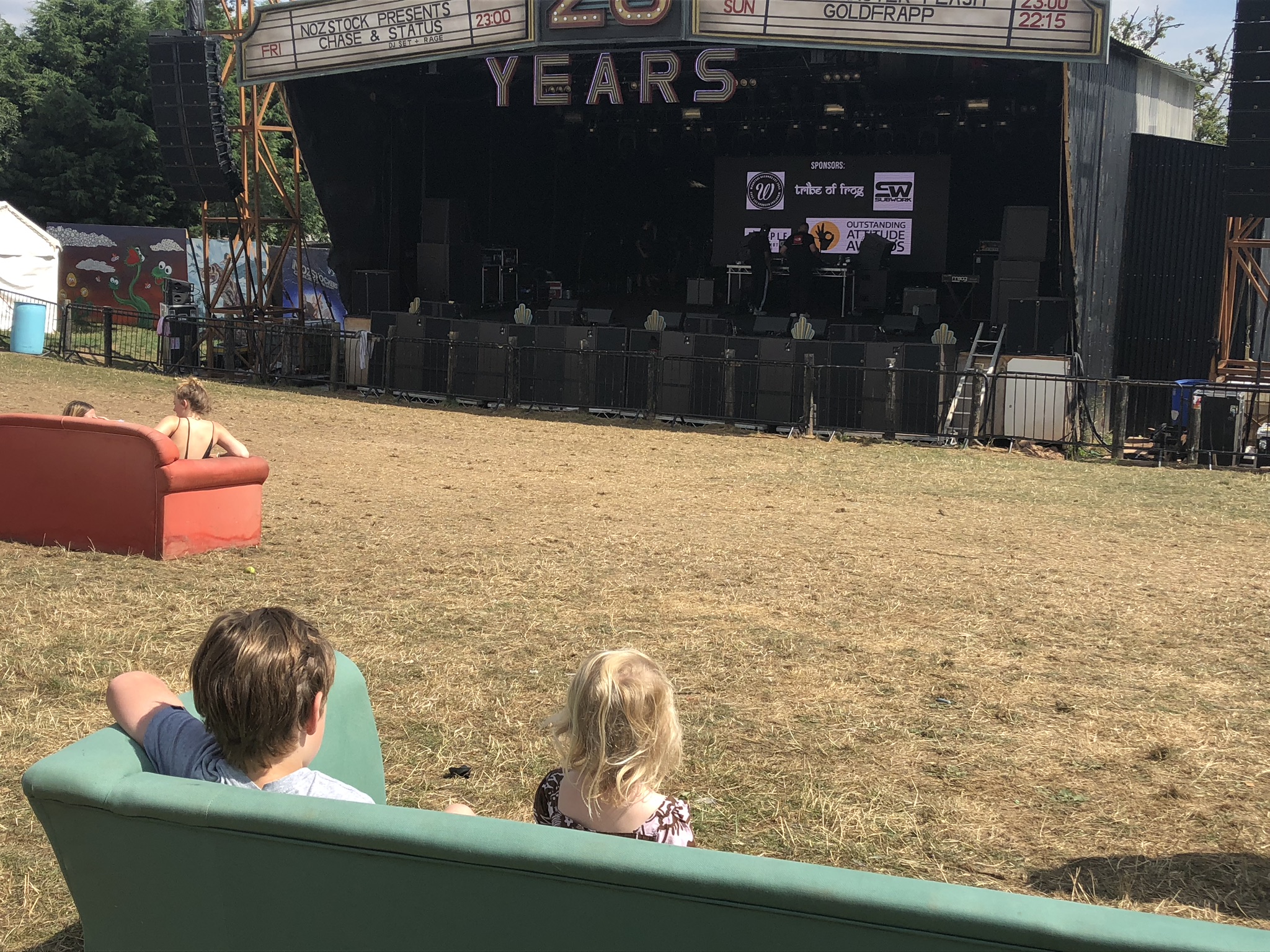 Roughly 25 years I have been coming to festivals. Working at them and playing at them. Festivals have changed a lot or maybe it’s just me that has changed. I found Nozstock reminds me so much of what festivals used to not be like, but definitely feel like.

I love how Nozstock is so completely uncorporate. I love the fact they don’t have flash commercials and presentations thrown at you continuously. I love they don’t have lanyards, apart from the environmental issues of the silly things it means you are left to wander and take in and stop and see things you wouldn’t expect.

It’s been a long time since I felt so relaxed at a festival and the children felt the same. They were feral with minutes of arriving. Dylan had kicked his trainers off within minutes of walking through the gates and Matilda was running around with hula hoops and glitter on her cheeks in the same time. Nozstock you were a absolute pleasure and we will make sure we are free to come back again next year. It’s a massive thumbs up from Dylan and us.

Tickets for 2019 are on sale now at http://nozstock.com/tickets/  Super early bird tickets have already sold out so be quick! 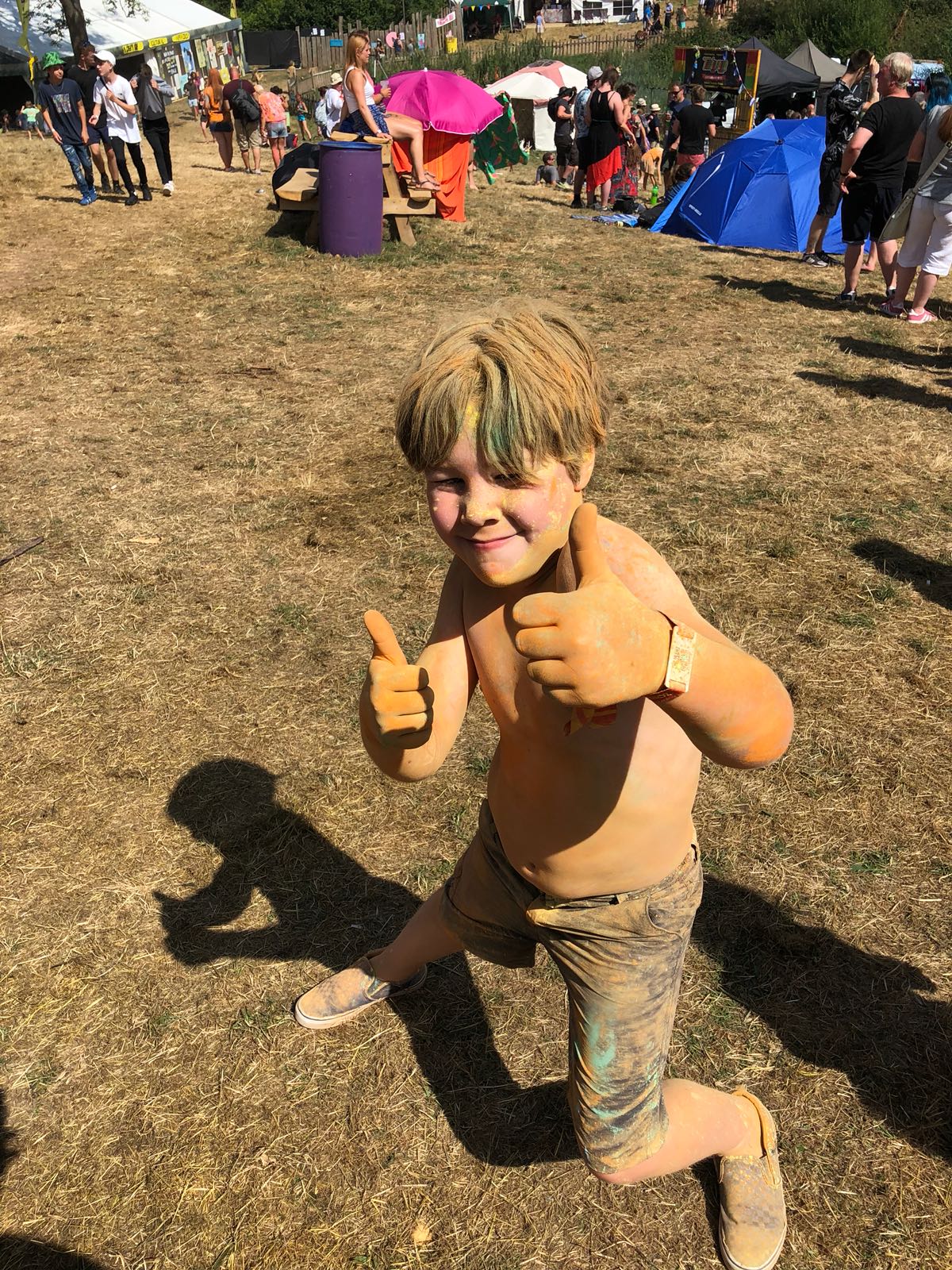