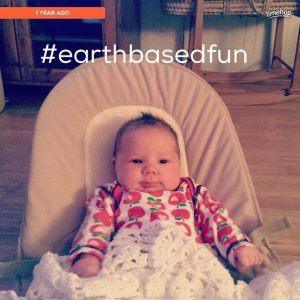 The above photograph came up on my time hop this morning along with the words ‘it’s 10pm and I am ready to party’. I would love to say it made me think nice thoughts of baby cuddles and kisses but it actually turned my stomach!

Dylan was a good sleeper and from 3 months would sleep right through and most of the day if I let him but Tilly took slightly longer and I managed on a few hours sleep most nights and that was on a good night. I’m not complaining (honestly) but it got me thinking about how we all survive those first months. Do we have something running though our bodies that was produced in the late stages of pregnancy? Is it a case of not having a choice and just having to do it? I don’t know how I could do it now but in those first months you don’t really think about it, you just do it.

They say to sleep when baby sleeps in the day but you very rarely do especially if you have a child that doesn’t like sleeping in the day, then you really don’t have a choice or you may have elder siblings at home so sleep is not a option. I actually think having some time to yourselves is more important than sleep when you do get the chance. Don’t be afraid to ask for help now and again. One of the best things we had in the early days was a friend bring us a meal around one night. It was heaven to eat something and not have to of thought about getting it or preparing it.

You must of course make the most of those wonderful first months and I like to think sleep is overrated. Good job in those first months because you won’t be getting any!